The secret postal service has been an exciting project this summer that got opened up at Secret Garden Party festival last week (16th July -)
The whole project has transformed a lot, so I thought I would note down how it progressed.
Early March time I was thinking of a festival installation that engages through participation and was founded upon some of my existing performance works. A suggestion I was given was to let people write postcards to be flown away attached to helium balloons (applying the gesture in my film ‘red suitcase’). So the original concept was a Secret postal service that only did airmail. I enjoyed the idea of people finding these messages attached to balloons, this message in a bottle form of communication. This is what I wrote up and sent off to festivals.

During the first meeting with Secret Garden Party I quickly proposed to scrap the balloons to save money, and turn it into a realistic post office replication – delivering mail on the festival site. Everything became a royal mail rip off, and although they had a post office on site a couple of years before, the concept of exclusively delivering mail to people on the festival site was entirely new.

MAY – JUNE
During production I got a group of friends together to be postmen/women. We all began resourcing as many postal props as possible for our post office tent at Secret Garden party. I decided the post office had to be a place for performance and exchange, playing on the public-post office assistant relationship, we were inspired by local post offices in the country side, where news and gossip is discussed before first class stamps are licked. We thought it was important to have as much stationary and recourses as possible to widen accessibility and engage through arts and craft.

I picked up a book in the library called ‘networking: art by post and fax’ that had fluxus artists who had worked with this participative communication method.

The secret postal service allows everyone to create and communicate to each other through traditional and anonymous forms.
At this point we were going to invite the public to write secret and anonymous notes, or write them for their friends but be aware that the correct delivery ratio was not strong. We knew there would be inspiration for plot and exchange based on current affairs of the royal mail, from cultural references to political affairs. People frequently shouting ‘Stop…wait a minute Mr. postman’ or asking ‘any mail for me today’ or coming into the post office demanding their ‘suspicious package’. 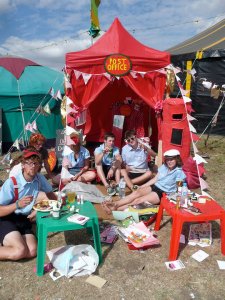 The Festival
So after collecting props from Brighton, London and Norwich we drove up in a car with mailbags filled with stationary. We got everyone onto the site and pitched up our red gazebo, the post office was up. The next day, Thursday we blagged as much as we could of all the other performers including power, clip ties, paint, drills, wood, you name it, someone would share it. We made 3000 (blank) postcards. We made our very small Gazebo the most decorative on site with more bunting and fairy lights than we could install. By putting the tables out the front with all the stationary ready to use the post office could have endless amounts of people sat on the grass making their mail. The postbox arrived on late Thursday night and we were ready.

Friday
We got lots of families and early risers making mail for their friends who were still sleeping off the night before. It was important to get people making mail early so we could start roaming and delivering mail. We found it a lot easier to locate people when they were in their tents, early mornings the majority of people are in the same field (the campsite) and with some good tent descriptions we started waking people up with mail that there friends had sent them. It was a spectacular surprise to discover that we were finding the right people, and with a mega phone everything was possible. Friday was definitely our busiest day; I think more people are exploring the festival. However as the day went on we began finding it a littler harder to locate the correct people, but we began getting mail to be delivered for the following morning.

Saturday
After a batch of very successful rounds we slowed down in the afternoon, with a gentle amount of custom.

Sunday
Due to some vehicle commitments we had to shut the post office Sunday lunchtime, which was a shame but the decline of people awake during the morning had got less and less. We gave the postbox away to a keen poster who danced with it for the rest of the night. 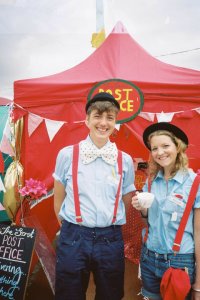 The Secret postal service as a festival performance bandstand had been an incredible success. The amount of jolly feedback and bafflement at the whole idea made me a little bit proud. Adapting traditional forms of communication (letters and postcards) and encouraging people to decorate them in anyway possible (glitter, collage, dymo labeler) creates an exciting, mysterious and relational artwork. People participating and connecting; creating networks and messages with the secret postal service.

more images and videos to be uploaded shortly….

This entry was posted in Interests, Secret Postal Service (2010). Bookmark the permalink.